Ever since their inauguration on May 5th, 1862, the Hotel de la Paix (which then became the InterContinental Paris le Grand Hotel) and Café de la Paix are genuine institutions enjoying worldwide fame.

Spirited gastronomy is the hallmark of this outstanding venue, which also serves a selection of fast fare all day long in the indoor terrace. When fair weather returns, it unfolds its renowned summer terrace facing the flamboyant Opéra-Garnier.

There is also the Table d’Hôte in the heart of Paris, brunch on Sundays… Café de la Paix has a great many aspects which we encourage you to explore.

In 1896, Eugène Pirou started holding screenings of the brand new cinematograph in the mezzanine. Admission was 1 Franc, and showings ran from 8 pm to midnight.

In 1898, on a sultry summer afternoon, a regular customer by the name of Oscar Wilde witnessed a strange phenomenon: the street had just been watered down and a light mist was rising from the ground. Suddenly, within the fog forming across the square, he saw a golden angel appear, who kept growing and growing… This caused much excitement… Women fainted… Tables were knocked over… Was this a miracle? Not at all. It was the golden allegorical character perched atop the Opera that was actually reflecting the sunrays into the mist, and it was its image floating in the middle of the square!

In 1914, the Taxis of the Marne heading for the warfront paraded by the building. During the victory celebrations, Georges Clemenceau took up position on the first floor to admire the troops parading past the Opera.

In 1938, the Management at Café de la Paix founded Pam Pam, a chain of restaurants inspired from an American model and putting forward fast service and affordable prices. A  Pam Pam was opened on the Champs-Elysées, another on the location of the Opera Bar. Riding on a successful trend, those initial Parisian attempts at fast food were highly profitable right into the seventies.

In 1939, and for the first time ever, Café de la Paix was closed for business on the day war was declared.

On August 25th, 1944, during the fighting to liberate the city, a German grenade caused a fire to start, which was quickly put out by the headwaiters using their soda siphons.

In November 1948, the restaurant became the set for the shooting of “This is Paris”, the first programme to be broadcast live from France to the United States, and featuring Yves Montand, Maurice Chevalier and Henri Salvador.

During the fifties, Marlene Dietrich attracted such huge crowds to jam Café de la Paix that the waiters had to use a special itinerary to go from the kitchens and the counters to the dining rooms.

In 1976, TV journalist Leon Zitrone decided to celebrate his career jubilee at the Café. He sent splendid invitation cards to all of his friends and relations. But the MLF (Wacky French Movement), headed by humorist Pierre Dac and friends, decided to play a trick on him and had bogus invitations printed, which they sent to all the concierges in the 19th arrondissement, to circus companies and to accordionist associations. On the day of the party, that motley crowd showed up with their invites!

In 1982, the Comédie Française Theatre celebrated the 300th anniversary of its founding by Molière with a sumptuous dinner attended by the entire company, including Jean Piat, Sophie Desmarets, Jean le Poulain, Michel Duchaussoy, Annie Ducaux, Georges Descrières, as well as friends of the illustrious institution like Bernard Blier and José Artur.

In 1989, the Café celebrated the Bicentennial of the French Revolution, complete with an exhibition of revolutionary scenes in window displays made in cooperation with the Grévin Museum, and the presentation of the Centennial Marianne Bust to the press.

In the year 2000, Café de la Paix was awarded the Grand Heritage Prize, organised by Paris Town Hall for all of the cafés, restaurants and cabarets in the capital city.

In 2003, Café de la Paix was entirely renovated, under the supervision of the Bâtiments de France Authority. The former garden-style décor and its partitions were removed to provide less cluttered and brighter perspectives, restoring the venue’s original volumes and ambiance. 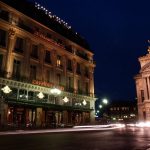